The Origin of the APO Phils. Left Handclasp

(Disclaimer: This article is not part of the traditions and lectures of ΑΦΩ Phils., which also found on this website. This article is based on a research on ΑΦΩ’s general history.)

Baden-Powell’s 1908 edition of Scouting For Boys (issued as 6 pamphlets) stated:

“If a stranger make the scout’s sign to you, you should acknowledge it at once by making the sign back to him and then shake hands with the LEFT HAND.”

The “History of the left-hand Handshake” comes from Africa

“During the summer of 1946, a young West African, named Djabonar, came to Gilwell Park to take his Wood Badge Training. He is hoping eventually to become Assistant Organizing Commissioner for the Gold Coast. When the Camp Chief was talking about the left handshake, Djabonar told him how in January, 1896, at the fall of Kumasi, the capital city of Prempeh, the Chief of the Ashanti people, his grandfather, one of the chiefs, came forward to B-P.

And held out his left hand. Baden-Powell. Offered his right in return, but the Chief said: ” No, in my country the bravest of the brave shake with the left hand.” There is no reasonable doubt that among the many explanations of the left handshake of the Scouts and Guides this is the true original” – Lord Rowallan, Chief Scout, British Commonwealth and Empire, 1948.

1915 to 1926 BSA Handbooks: Right Handed-Three Fingered. “Scout Handclasp: The boy scout handclasp is made with the right hand, the fingers in the same relative position as in making the scout sign. The three fingers extended represent the three parts of the scout oath; and the bent position of the thumb and the little finger represents the knot or tie that binds these parts together into a strong unity. One scout shakes hand with another by a good warm handclasp with the three middle fingers extended in a straight line along the other’s wrist, and with the thumb and little finger clasped around the other’s fingers.”

1927 to 1971 BSA Handbooks: Left Handed-Three Fingered. “Scout Left Hand Clasp: By agreement of the Scout Leaders throughout the world, Boys Scouts greet Brother Scouts with a warm left hand clasp … to remind Scouts they belong to a world wide brotherhood … In America, Scouts extend the left hand with the little finger separated from the others … and interlocked with the little finger of the person with whom you are shaking.” 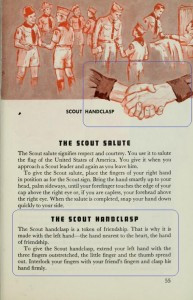 The BSA handclasp from 1927-1971 was the left-handed, interlocking pinky version. Only BSA used this.
Source: BSA Handbook, 1967 Edition, Page 55

1972 to present BSA Handbooks: Left Handed – normal. “The Scout Handclasp: It is made like a right handshake of greeting except Scout use the left hand. The little finger is not separated from the other fingers. The handclasp in the United States is the same as for Scouting in all the other countries of the world.”

Introduction of the APO Phils. Handclasp

The APO Phils. Handclasp and the 1927-1971 version of the BSA Handclasp are one and the same: left-handed, three-fingered, with interlocked pinky.

The APO Phils. Handclasp came to being because Solomon Levy, a professional scouter, did not become APO as a student. He became an honorary member of APO-USA’s Gamma Alpha Chapter (Washington University) as a professional. He subsequently became the chapter’s scouting advisor.

This is most probably why Bro. Levy did not know how to pass on to the APO Phils charter members led by Librado I. Ureta the original APO Handclasp devised by Thane S. Cooley.

Because of this, the introduction of the BSA Handclasp of 1927-1971 (left-handed with interlocked pinky) to the first batch of APO Phils. members can be attributed to Solomon Levy.

A screenshot of Solomon Levy giving the left handed-three fingered handclasp to Boy Scouts of Japan Chairman Michiharu Mishima during the former’s visit to Japan prior to arriving in the Philippines, can be viewed here: 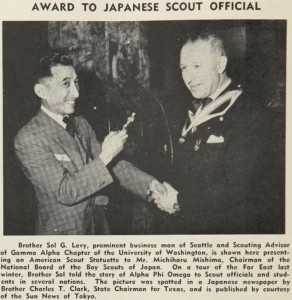 Solomon George Levy, being an honorary member of APO, probably was one of those who had not undergone the initiation rituals, and therefore did not know how to pass on to the charter members of APO Phils the Thane S. Cooley right handclasp.
Source: Torch & Trefoil, December 1950

A close up of the handclasp of the two individuals can viewed here: 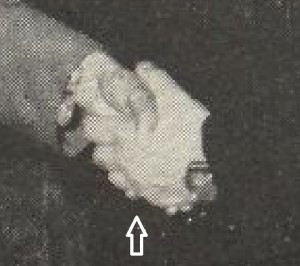 Close up of the left-handed, interlocking pinky version of the BSA handclasp made by Solomon Levy to Japanese Scout Chairman Michiharu Mishima.
Source: Torch & Trefoil, December 1950