The Origin of the “Pledge of Loyalty”

This so called poem authored by Elbert Hubbard was never introduced by Frank Reed Horton – or any of the charter members – as a “lecture”, a “history”, or a “tradition” in the application period for new members when they founded ΑΦΩ in 1925.

It has NEVER been taught to pledges in ΑΦΩ USA chapters in its entire history (1925 to present).

Also, it DOES NOT exist anywhere as a separate literature (poem or article).

Also, Elbert Hubbard is not a member of ΑΦΩ. He lived before ΑΦΩ was founded. His real name is Elbert Green Hubbard. 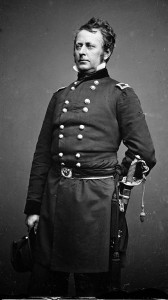 “‘Get Out or Get in Line’ was penned by E. Hubbard as a rebuff to Major General Joseph Hooker’s (1814-1879) criticism of his Commander-in-Chief, then Pres. Abraham Lincoln.” – Bro. Jessie Castillo, Epsilon Pledge Class of 1968, Life Member ’76. 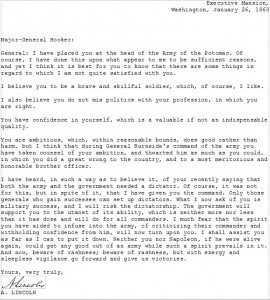 This shortened derivative of “Get Out or Get In Line” has become part of the “lectures” of many training courses of institutions that are part of the security-sector (military, police, intelligence organizations, etc.), because of this historical precedent of loyalty issues between Pres. Abraham Lincoln and MGen Joseph Hooker.

In the United States Air Force 58B Officer Candidate School in Lackland Air Force Base, San Antonio, Texas, it is called “Hubbard’s Statement on Loyalty” and it is part of the requirements for memorization. (http://homepages.rootsweb.ancestry.com/ocs58b/potpourri/memory-work.html)

In the article entitled, “Reforms in the Military: The officers who say no”, by Luz Rimban, which was published by the Philippine Center for Investigative Journalism, it was stated that the so called “Pledge of Loyalty” is indeed used as one of the training doctrines in institutions that are part of the security sector.

“Officers who graduated from the PMA are supposed to be guided by the honor code to help them remain on the right path. But then they also swear by an oath of loyalty authored by the 19th-century U.S. publisher and writer Elbert Hubbard…

…The oath is a pledge of submission used all over the world in various organizations, such as the U.S. Federal Bureau of Investigation (FBI), and by superiors and bosses to enforce what some people say is “blind loyalty”. Explicit in the oath is a promise NOT to BLOW THE WHISTLE on an organization to which one belongs,” the article said. (http://pcij.org/stories/the-officers-who-say-no/)

“The poem as we know it in text, is a paraphrased version of the original and is widely used in the military as a tool to instill in the soldiers’ minds the value of organizational loyalty. I was once told by a brother who was of that era that, sometime in the early 1960s, a group of ROTC cadet officers became members of ΑΦΩ and this group saw it fit to incorporate what they felt was something that essentially instilled loyalty in them into our indoctrination” – Bro. Romulus Jove Beltran (RIP), Tau Chapter, Pledge Class 1976.

The Real “Pledge of Loyalty”

The EXACT WORDS of the portion of Hubbard’s article from which the so called “Pledge of Loyalty” was derived is written as such:

If you work for a man, in heaven’s name work for him!

If he pays you wages that supply you your bread and butter, work for him—speak well of him, think well of him, stand by him and stand by the institution he represents.

If put to the pinch, an ounce of loyalty is worth a pound of cleverness.

If you must vilify, condemn and eternally disparage, why, resign your position and, when you are outside, damn to your heart’s content.

More then that, you are loosening the tendrils that hold you to the institution, and the first high wind that comes along, you will be up-rooted and blown away in the blizzard’s track—and probably you will never know why. The letter only says, “Times are dull and we regret there is not
enough work,” ……. (http://www.foundationsmag.com/hubbardloyalty.html)

The same article of “Get Out or Get In Line” was republished as a booklet by the Roycrofters, an artisan community founded by Mr. Hubbard himself, based in East Aurora, New York. 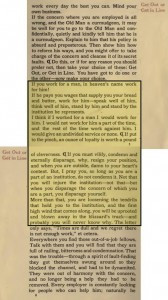 The derivative “poem” of Hubbard’s “Get Out or Get In Line” is one of many “doctrines” that form part of military academy tradition.

Due to absence of mentoring, comparison and exposure to service fraternities, ΑΦΩ Phils. chapters did not have any idea how a service fraternity actually functioned. Many thought ΑΦΩ was supposed to be a secret society. No one told them they were wrong.

In the 1950s and 1960s, when chapters initiated new members with previous military training background, and they themselves were eventually put in charge of the pledging system of the chapters, it was plausible that they had presumed that incorporating these “military-oriented” teachings would help strengthen loyalty to one another and to the organization. Though in some aspects it did, in the end its purpose was more towards helping to perpetuate and protect hazing activities within ΑΦΩ Phils from being exposed to the law.

We must take stock of the fact that “Get Out or Get In Line” was talking about a military general who did not recognize the authority and position of his country’s president. A soldier who practiced backbiting against his commander-in-chief and who regularly disobeyed the orders of his superior. The manner of the words implied less about organizational loyalty, and more on obeying orders, whether one likes the orders or not. Or whether right or wrong. If this is so, then it is not consistent with the Scout Oath and Law and the highest ideals of our cardinal principles.

In the context of a service fraternity that is supposed to abide by the laws of the land, this pledge of loyalty becomes IRRELEVANT, even CONTRADICTORY to the principles of the service fraternity. When one violates the law secretly, one is committing a DISSERVICE to one’s country and its laws. But in the context of a fraternity that HIDES criminal-like activities from the law, such as hazing, then the so called “Pledge of Loyalty” is beneficial, because one is taught to obey orders, whether we like them or not, or whether they are against the law or not.

Teachings like this actually “indoctrinate” into the minds of incoming pledges that hazing practices are “good and part of it” and must be kept hidden from the law, even though hazing activities are already criminal acts prior to “no-hazing laws” (slight to serious physical injuries) and have corresponding jail terms, in addition to the potential to taint or disgrace the name of the whole ΑΦΩ organization and the entire ΑΦΩ membership.

Fortunately, ALL of these interconnected “teachings” did NOT come from FRH or the founders. They are also unknown to – and never practiced by – ΑΦΩ USA chapters.

Most importantly, following precedents related to sanctioned practices and traditions from 1925 upto the present, no ΑΦΩ Phils national convention has ever officially enacted that the derivative “poem” of Hubbard’s “Get Out or Get In Line” become part of ΑΦΩ Phils established “lectures”, except when the APO Pledge Program (APP) was implemented over ten years ago.

In addition, there already are traditions in Alpha Phi Omega that promote the value and virtue of loyalty that is consistent to the service program of ΑΦΩ prior to the inclusion of the so called “Pledge of Loyalty” into ΑΦΩ Phils traditions.