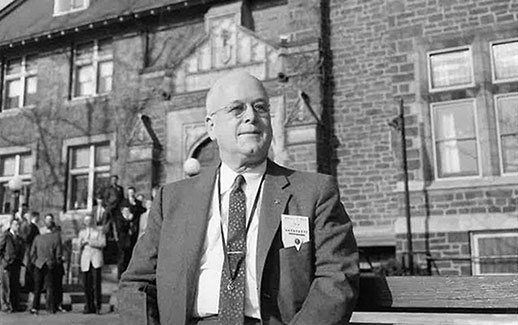 The Story of Our Founding

During the first World War, I served as an ensign in the United States Navy aboard a minesweeper in the North Sea. Our ship and its partner exploded more than 1,000 magnetic mines. My law school background at Boston University led to my appointment to try court martial cases in our division. When we reached ports some of the sailors ran wild. Many court martial cases resulted. I saw young boys in their teens getting into trouble.

Because of these experiences, I made a firm resolution within myself that if I returned alive, I would try to do two things and do them with all my power. First, do my best to help young people get the right start in life by holding up before them a “standard of manhood” that would withstand the test of time! Second and just as important, try to help the nations of the world settle their disputes in a more sensible and legal manner than war.

After the war, I became a student at Lafayette College. One evening, while attending an American Legion banquet during my sophomore year, I sat next to an inspiring man named Herbert G. Horton. We were not related but we became fast friends. He, too, had been a naval officer but was now serving as the local scout executive. He helped me to become a deputy scout commissioner. One of the troops needed a leader, so I became a scoutmaster as well.

Through these experiences, I found that the Scout Oath and Scout Law were what I had been seeking — a standard of manhood that would withstand the test of time and a code of ideals created and accepted by some of the greatest leaders the world has ever known.

The summer of my junior year was spent as an associate camp director at the Easton Scout Reservation. Here, I was impressed with the religious tolerance in the hearts of boys. This I have not found so easily among older people. Scouts of the Catholic, Jewish, and Protestant faiths worked together in everything at camp, and everyone had an opportunity to worship on his Sabbath in his own way.

My brothers in the Sigma Alpha Epsilon fraternity house, where I lived, who were outstanding for high ideals and clean living, were all former Scouts. I felt a college organization should be formed that would strengthen men in these ideals, and give them an opportunity for leadership experience and for service to others.

As a senior at Lafayette College, I talked to some of the men with a scouting background and the response was good. These men would join an organization based on the ideals of scouting. I created the name Alpha Phi Omega, the motto and the Greek words and their meaning and wrote the Ritual. Everett W. Probst designed the pin and drew the coat of arms. Thane S. Cooley suggested the handclasp. Ellsworth S. Dobson and Gordon M. Looney helped write the Fraternity’s Constitution and Bylaws.

The Lafayette College faculty approved the petition for recognition. On December 16, 1925, I conducted the Ritual Initiation at Brainerd Hall, second floor, and Alpha Phi Omega was born. My purpose was to make Alpha Phi Omega an organization for college men who cooperated with all youth movements, especially scouting. I also anticipated that our service program would expand to help people in need everywhere and to do service on the campus of each chapter.

As scouting is worldwide, so should Alpha Phi Omega be worldwide, gradually in the colleges and universities of all the nations. Alpha Phi Omega can help bring about, through the future statesmen of the world, that standard of manhood and international understanding and friendship that will lead to a better, more peaceful world in which to live and in which to make a living and a life.

At the Fellowship Banquet of the 2004 APO USA National Convention in Denver, APO USA Past National President Lawrence L. “Pinky” Hirsch, M.D., presented additional insight into the Fraternity’s founding. Pinky shared with the delegates information that had been provided to him by “The Chief,” the Honorable H. Roe Bartle, shortly before Brother Bartle’s death in 1974. The Chief had asked Pinky to hold the information in confidence for 30 years and then share it with a new generation of brothers to provide a larger perspective on the Fraternity’s inception.

Pinky described key roles that The Chief and Scout Executive Herbert G. Horton played in encouraging, guiding and facilitating Frank Reed Horton’s efforts to establish Alpha Phi Omega. The story demonstrated that, from its very beginning, Alpha Phi Omega has been a partnership between students interested in Leadership, Friendship and Service and advisors interested in helping students succeed in the development of those noble principles. Pinky explained the founding of the Fraternity as a tripartite endeavor accomplished together by Frank Reed Horton, Herbert G. Horton and  H. Roe Bartle.