The ΑΦΩ Coat of Arms and its Changes

(Disclaimer: This article is not part of the traditions and lectures of ΑΦΩ Phils., which also found on this website. This article is based on a research on ΑΦΩ’s general history.)

The Original Coat of Arms

The original ΑΦΩ Coat of Arms was designed by Everett W. Probst.

Probst had previously founded a new local fraternity at Lafayette College called Fraternity of Mound Builders, or Krescents, before Frank Reed Horton convinced Probst to abandon the Krescents and join him in founding ΑΦΩ in 1925.

The Coat of Arms underwent several authorized AND unauthorized revisions.

The original version of the Coat of Arms was first seen on the March 1928 Torch and Trefoil Issue.

Note also that the so called “Lafayette’s Cross” is shaded instead of white, while the “12 droplets” have the “two-over-one” arrangement. 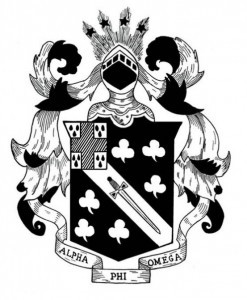 The Coat of Arms was first revised in 1931 and was first seen on the Fall of 1933 issue of The Lightbearer. 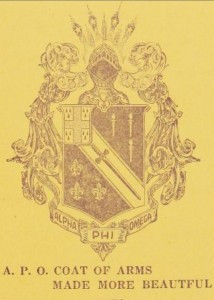 The six (6) trefoils (cloverleaf) were replaced by three lighted torches and three fleur-de-lis symbols to reflect changes in the Initiation Ritual of Alpha Phi Omega.

Bro. Andrew R. Janson (Xi Chapter), National Board Member of that year, was the one who re-drew the Coat of Arms as it essentially exists today. He was not credited explicitly with the revision, however.

On page 3 of Volume 7, No. 2 of The Lightbearer (dated May 10, 1932), there is a short piece entitled “Crests” that reads in part, “Brother Andrew R. Janson, a nationally known artist and illustrator of the Boy Scout Hand Book, makes very beautiful Alpha Phi Omega crests, suitable for framing.” The piece goes on to inform the Chapters that they can contact Brother Janson in San Diego for “art work of any kind.” 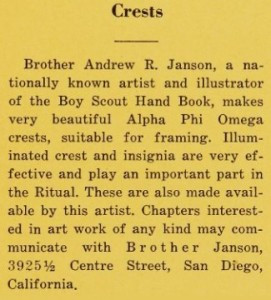 Fortunately, he signed the original that was first published in The Lightbearer Fall 1933 T&T. On the left is written “Santa Fe, NM,” and the right, his name, “A.R. Janson.” 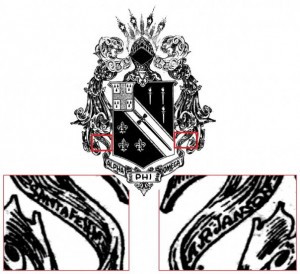 Founder Frank Reed Horton officially acknowledged this change when he wrote the memorial tribute to Probst on the January 1959 issue of the Torch & Trefoil. 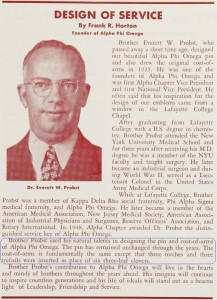 These same changes were also narrated on the History Facts section of the ΑΦΩ History Book of 1993. 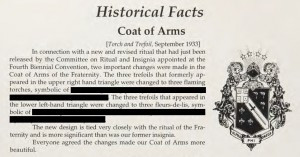 Though no National Convention after 1931 made any adoption to revise the Coat of Arms anew, changes to it have been made, nonetheless.

The changes made by Janson in 1931 did not include three things that are now found on the Coat of Arms of today:

1. The “two-over-one” droplet arrangement,
2. The “wind-blown” depiction of the three torches, and
3. When the CoA was given the royal blue and gold colors, the so called “Lafayette’s Cross” was rendered in the color white.

The first time the Coat of Arms with the “one-over-two” droplet arrangement was seen was on the background of the cover page of the Torch and Trefoil’s April 1957 issue.

This Coat of Arms also had the “wind-blown” depiction of the three torches and the white color to the so called “Lafayette’s Cross”, also seen for the first time on the publication. 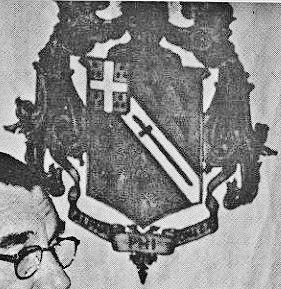 First time displayed on the Torch & Trefoil that a real-life CoA with its twelve “droplets” showing the “one-over-two” arrangement. Source: Torch & Trefoil, April 1957.

The Coat of Arms in question is most likely the property of Epsilon Psi Chapter, Kent State University.

The first time that an ILLUSTRATION of the Coat of Arms with the “one-over-two” droplets arrangement was seen on the Torch and Trefoil’s April 1960 Issue. 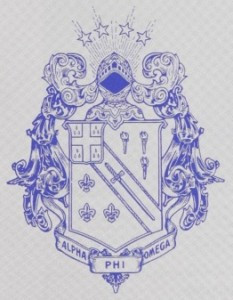 First time displayed on the Torch & Trefoil of a CoA illustration that the twelve “droplets” had taken a “one-over-two” pattern. Source: Torch & Trefoil, April 1960.

However, instead of the “wind-blown” torches, the original thin and long torches returned.

It is likely that LG Balfour, the official jeweler of ΑΦΩ, may have had a hand in “refining” the depiction of the Coat of Arms and in incorporating the “unofficial changes” to its image as it manufactured three-dimensional, full bodied Coat of Arms that attempted to mimic what was originally a two-dimensional illustration on paper.

An article implying their potential involvement in the unofficial changes can be found on the The Lightbearer, Fall 1933 issue. 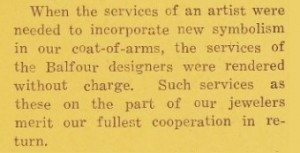 Paragraph mentioning the contribution of LG Balfour in manufacturing real-life CoAs and Badges as pins based on two-dimensional illustrations. Source: The Lightbearer, Fall 1933.

Surprisingly, the Coat of Arms illustration with the “two-over-one” droplet arrangement returned to the Torch and Trefoil on the November 1964 issue, despite the widespread use of the “one-over-two” rendition. 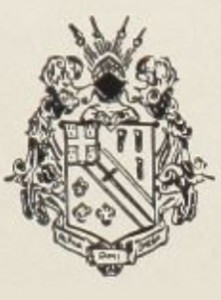 The first return of the “two-over-one” arrangement of the CoA’s twelve “droplets” on the Torch and Trefoil. Source: Torch & Trefoil, November 1964.

On occasions, the Coat of Arms with the “two-over-one” droplet arrangement can still be found being used today. 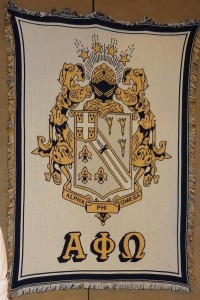 The current version of the Coat of Arms, as depicted in the ΑΦΩ Phils Brand Guide and and the ΑΦΩ USA Graphics Guide, is generally rendered in blue and gold, shows the “one-over-two” droplet arrangement and the wind-blown torches. 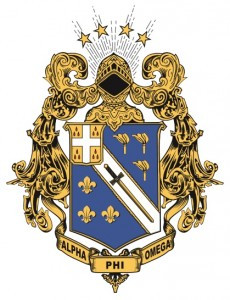 There are have of late emerged a few renditions of the Coat of Arms that are not consistent to, or compliant with, what was set forth in the ΑΦΩ Phils Brand Guide and and the ΑΦΩ USA Graphics Guide in terms of coloring and depiction of parts.

The following are some of the non-compliant renditions of the CoA: 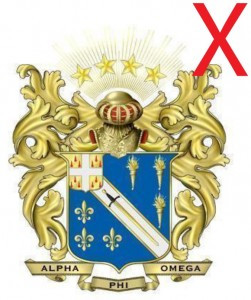 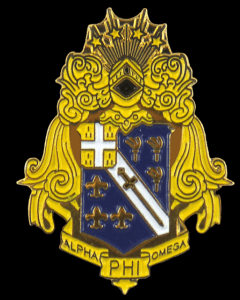 Green fleur de lis and red flames. These are not the correct colors.