It all started with a service project.

(1) World War II had recently ended, but it had left its devastation around the world. The major cities of Europe had been heavily damaged, and many of the cities of Asia and the Pacific had been destroyed. Manila, the capital of the former US colony Philippines had been occupied and was now in ruins; its universities, rubble. What, if anything, could college students across the Pacific in the United States do that would have any real effect? It turns out, quite a lot!

Some of the Alpha Phi Omega-USA Brothers in Texas and the Pacific Northwest had fought in these islands. They knew, firsthand, of the friendliness of the people and of their need. They knew that education of the young people was a vital necessity if the country was to get back to its feet. They could do something, and they did. Book drives were started on their campuses and hundreds of textbooks, used but useable, were gathered from their libraries and fellow students to be sent to the Philippines to help re-stock the many burnt-out college libraries in Manila.

It was a successful service project, but like many one-time projects, it was soon forgotten, remembered only in the scrapbooks of the chapters involved and in the mind of the then APO-USA National President (1931-1946) H. Roe Bartle “The Chief”. It was a good example of a service project; it had all of the elements of a good story; and the Chief never forgot a good story.

Time passed. It was January 1950, and (2) Sol George Levy (Gamma Alpha 1947), a professional scout, an APhiO member at the University of Washington in Seattle, Washington and a friend of Dr. Bartle, was going to the Philippines to help generate more interest among the Scouts here. The Chief told him what APO had done a few years earlier to help re-establish Filipino university libraries. One January evening that year, scouts in Manila were invited to a conference by Mr. Levy. He passed on the story to them, mentioning how nice it would be if a Scouting-based fraternity similar to Alpha Phi Omega could be established in the country. He expressed his desire to organize Alpha Phi Omega, and distributed some copies of three APO publications: Questions and Answers, National Constitution and By-laws, and Ritual Rites and Ceremonies.

The story was of particular interest to a group of Scouts at Far Eastern University in Manila. It may be that their library was one of those which had been helped, or it may be that the idea of a Scouting-based fraternity just struck fertile ground. Librado Inocencio Ureta, an Eagle Scout, a graduate student, and was among the audience; together with a group of over twenty Scouts and advisors began organizing work. 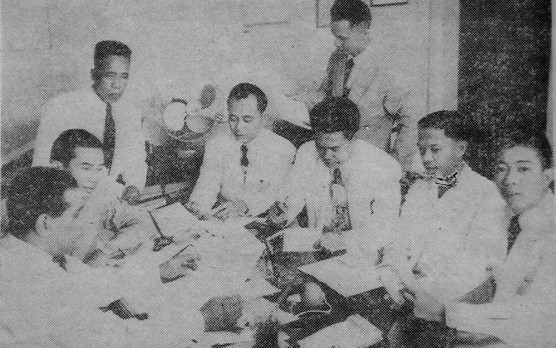 On March 2, 1950, at the Nicanor Reyes Hall, Room 214, Far Eastern University, Manila, Philippines; the first organization of Alpha Phi Omega outside of the United States of America was established. It is now known as the Alpha Chapter.

Alpha Phi Omega rapidly and healthily grew in the Philippines. In its third year, it became a national organization with seven chapters chartered in Manila and Visayan campuses. It was registered with the Securities and Exchange Commission (SEC) on October 21, 1953 as a non-stock, non-profit and non-dividend corporation with a registered name of Alpha Phi Omega (Philippines) Incorporated. It renewed its registration on June 8, 1981 with the SEC Registration No. 0099381 under the name of Alpha Phi Omega International Philippines Incorporated.

The Charter members who served as the first National Officers were:

The first seven chapters that incorporated APO Philippines were:

Alpha Phi Omega International (Philippines), Inc. was the first country to be chartered outside the USA. Although it is separate and independent from its mother country, it adheres to the cardinal principles designed by Brother Frank Reed Horton. The badge and revised coat-of-arms created by EVERETT W.PROBST, one of the original members, were adopted. However, the handclasp was patterned from the Boy Scouts’ and not from that of THANE S. COOLEY.

In “The Story Behind Founding”, Dr. Frank Reed Horton, wrote:

“As Scouting is world-wide, so should Alpha Phi Omega be
world-wide, gradually in the colleges and the universities of all nations,”

And so it did.

(3)The commitment of women in Alpha Phi Omega have been started and involved within the activities of the fraternity since the first decade of existence in the Philippines. 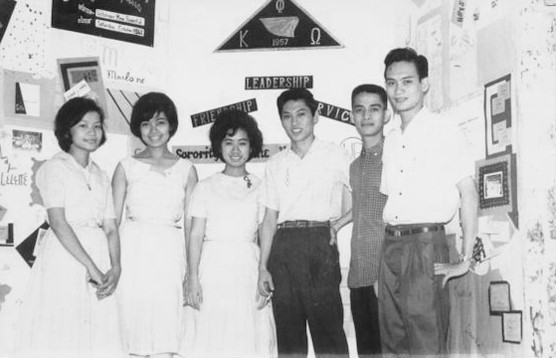 During the 50’s and 60’s, like every other campus with APO chapters, it was Alpha Phi Omega Fraternity and Kappa Phi Omega Sorority that ruled University of the Philippines in Diliman. They were partners…brods and sis. Scan courtesy of Eta Chapter

The Alpha Phi Omega Philippines National Board of Sorority was first adopted in the 6th National Biennial Convention held at Mapua Institute of Technology, Manila on March 6-7, 1965, under the national name of “Alpha Phi Sigma Sorority”, in which it served as the umbrella organization of all sister sororities of the different fraternity chapters of Alpha Phi Omega. This national sorority further united, formed and organized among the groups in order to integrate all the existing sister sororities into one national sorority under the jurisdiction of the Alpha Phi Omega National Executive Board (NEB).

The national officers who were elected by the sorority delegates to serve as the first National Board of Sorority in 1965 were as follows:

Records of the early fraternity collegiate chapters indicated their historical events regarding the establishment of their respective sister sororities as follows:

In 1968, the Alpha Phi Omega National Executive Board passed a resolution changing the Alpha Phi Omega National Sister Sorority name from “Alpha Phi Sigma Sorority” to “Alpha Phi Omega Auxiliary Sorority (APOAS)” to have a uniformity name from its nomenclature. Consequently, this paved the way for the integration of all sister sororities under one national name, in which it resulted to the recognition and granting of charter as Alpha Eta Auxiliary Sorority Chapter of Philippine School of Business and Administration, Manila, on September 17, 1968, with Sister Amelia P. Acuzar as the holder of National Sorority ID No. 001.

Accordingly, the chapters had converted their sister sororities and were issued charters into the Alpha Phi Omega Auxiliary Sorority. Moreover, the other chapters established their auxiliary sororities and were given charters too. Starting in 1968 up to 1978, the chartered chapters were as follows: 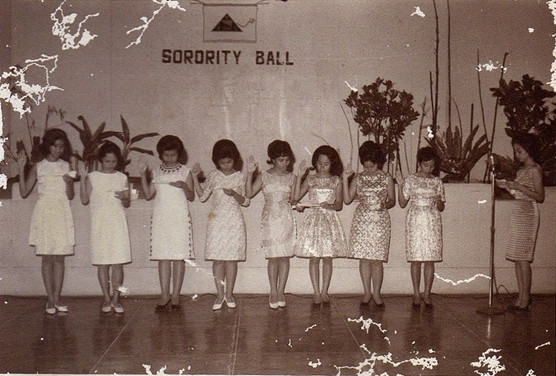 It was in the 8th National Biennial Convention held at the University of the Philippines, Los Banos, Laguna on December 17-19, 1971, that the Sorority was formally recognized and accepted as Alpha Phi Omega Auxiliary Sorority (APOAS), the sister association of Alpha Phi Omega Service Fraternity. But the name suggested a dependence on the brotherhood, and so it strived for the recognition of its own identity.

Finally, during the 10th National Biennial Convention held on March 30 to April 1. 1979, at Camp 7, Minglanilla, Cebu, the realization of the dream of the sorority came. The National Code of By-laws was amended and the Alpha Phi Omega Service Sorority (APOSS) came into being. The Office of the Vice President for Sorority Affairs was created, thereby giving its total recognition and equal footing with the Fraternity. Thus the Organization became Alpha Phi Omega International Philippines Incorporated Service Fraternity and Sorority.